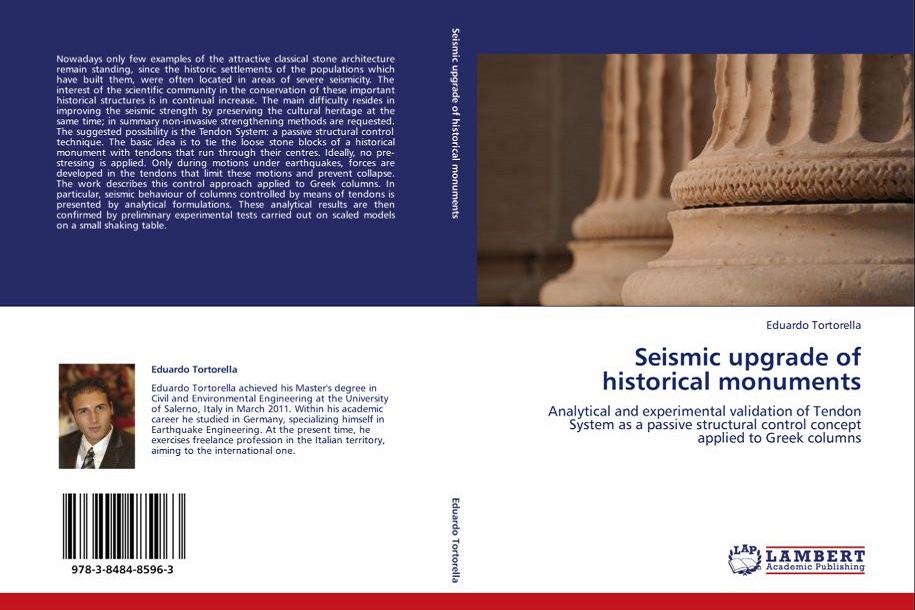 The testimonies of the past stone architecture got to the present are represented by some Greek, Roman, Byzantine, Romanesque and Gothic buildings; the fact that these ancient works still remain standing, proves an extreme stability of their structure. On the other hand, these constructions are only a few examples of the wide activity conducted by the ancient populations, since in the history urban settlements have been mainly located in seismic zones. This is a consequence of the fact that most convenient geographical locations for building a city are valleys and cross-roads, which frequently follow the locations and intersections of active seismic faults. Thus, the most historical monuments ever lived have been destroyed principally by earthquakes.

Consequently, the possible occurrence of seismic events has been bringing to spend an increasing interest in the conservation of vulnerable historical buildings located in seismic areas. These pieces of cultural heritage, thus, need to be seismically evaluated and strengthened by appropriate methods. Upgrading historical buildings in order to survive strong ground motions is a challenging task: their historical value must be protected and this means that the originality of the structure must remain intact, together with providing improved seismic performance. The more difficult question with respect to the maintenance problem and the restoring technique is to have a correct measure of the stability degree, by means of a model able to simulate the mechanical behaviour as close as possible. Hence, the seismic response of the historic construction is a subject in continual elaboration.

Besides the Egyptian one, the architecture nowadays most known by means of its objects d’art is that of Greece, from whose sacred monuments – namely the temples – is deduced all the knowledge of its principles. Grecian Architecture is very much common not only in Greece, but also in its colonies, like those of Magna Graecia formed in the southern Italian peninsula by Greek colonization starting from eighth century B.C.. One of these is Paestum, where there is a still existing proof of Greek settlement, constituted by three temples, whose oldest one is dated at 540 B.C. Despite the fact that these temples do still exist, it has to be pointed out that they are exposed to a high seismic risk, in fact Paestum arises in Campania, a region characterized by such a risk. For instance, the recent Irpinia earthquake, happened in 1980 and gifted of a moment magnitude 6.89, hit the region itself and the surrounding areas, causing almost three thousands death.

As earlier highlighted, seismic updating of historical buildings should be obtained without affecting their original specific characters. Advanced structural engineering technologies are capable of achieving this purpose by means of structural control concepts, one of which is the Tendon System. This system introduces a rigid body mechanism into the structure which is controlled through steel or different material (FRP, SMA, etc.) tendons with very little pre-stressing. In an effective Tendon System, the forces in the structure remain limited and are controlled at low levels by the tendons, not the earthquake. The very simple and effective idea is to tie loose building blocks with tendons that run through their centres allowing  the reducing of displacements and dissipating energy at the joints. Practical applications of this strategy are already available, nevertheless to fully understand its potentiality and to provide general design rules, an analytical model for the controlled system, with emphasize on non-linear joint dynamic behaviour should be validated by means of experimental tests.

According to this purpose, the present work is aimed to prove the efficiency of Tendon System, by performing an experimental campaign focusing on the dynamic response of small scale specimens representing Greek columns of Paestum, retrofitted by Tendon System. The experimental campaign has been executed at the laboratories of Steel & Composite Structures Department of Kassel University, Germany, under the supervision of Prof. Uwe Dorka. The testing facilities, among which the shaking table for the application of input excitations and the basic components of the specimens are provided by the same University.

In regard to Seismic Engineering experimentation, the field which manages the performance of experimental activities, it follows a synthetic digression about. Its paramount objective is to contribute in deep for the policies of prevention, formation or development leading to the mitigation of the seismic risk concerning the structural damage or collapse. The safety verification of a seismic action involves several concepts: necessary conditions, performance criteria, probabilistic reliability, hazard scenarios and quality guarantee. In spite of several scientific areas being under constant development, it is still nowadays very common to get important knowledge following the occurrence of each new catastrophic earthquake in a developed zone of the globe. In fact, there is no better seismic testing “laboratory” than the real place where an earthquake takes place, because it is absolutely impossible to reproduce artificially, and simultaneously, all the concerned phenomena. Anyway, and despite the wide numerical methods and computer capability developments, the tests will be always indispensable because they are the only way to reproduce seismic actions allowing its systematic repetition and the necessary scientific observation of their effects. Consequently, the main objective of the Seismic Engineering experimentation is, basically, to allow the observation and analysis of the damage and behaviour of different types of structures, under different conditions, while submitted to a seismic action. Seismic Engineering experimentation is also indispensable for the validation of analytical models and for the verification of new design methodologies or new strengthening or reinforcement structural techniques. The study of new materials behaviour and the analysis of the new methodologies still in a pre-normative phase need also the use of experimental tests. It should be noticed too that, apart the multiple aspects already referred, experimentation with earthquake simulators provides the certification of several types of anti-seismic equipments, such as structural control devices, in order to ensure their proper way of functioning during the occurrence of a major earthquake. In fact, such mechanical, electrical and electronic equipment of various types are main-stations and sub-stations material, nuclear power plants control units or hospital vital devices, just to quote a few of the more relevant examples.

Testing of complete structures is normally used to enable the understanding of the global behaviour of a construction and to capture the interplay of the response of its different components. It corresponds to quite expensive tests but, in principle, provides quite realistic information on the expected response of the specific structure under testing. On the contrary, tests on single structural elements or sub-assemblages are much less expensive but can only provide information of what could be called local nature. They are mostly suitable for the calibration and validation of analytical models of the elements that can be incorporated into a computer code with which the simulation of the response of a complete structure may be achieved. Hence, tests on elements or sub-assemblages are normally conducted on a large series of specimens so that the effect of different variables (for instance, geometrical proportions, mechanical properties or sequence of loading) can be checked and considered in the above referred validation of analytical models.

A rigid-bodies system, like a Greek column, responds to a ground acceleration showing one of the following five possible motions: rest, slide, rock, slide-rock or free-flight; they, depending on magnitude and duration of excitation, may or not turn into overturning. What is investigated in this research work, is the benefit produced in such a rigid block system by the installation of the above mentioned seismic retrofit.

In conclusion, by analyzing model response to the performed tests, it is stated that the desired improvement to be provided by the installation of a retrofit system – such as tendon passive control system – in a rigid-bodies system is obtained. By introducing a pre-stressing cable the eventual collapsing is avoided and by increasing the pre-stressing force in the cable, the total displacements of the system are reduced, which means that the relative rocking between the several bodies is also reduced, provided that sliding is however prevented by the installation of Tendon System.

Sorry, the comment form is closed at this time.